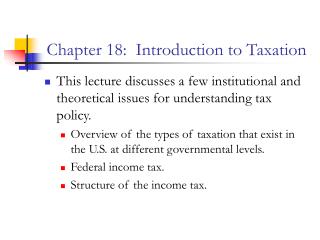 Chapter 18: Introduction to Taxation. This lecture discusses a few institutional and theoretical issues for understanding tax policy. Overview of the types of taxation that exist in the U.S. at different governmental levels. Federal income tax. Structure of the income tax. Figure 1. What is FINANCIAL taxation? - There are several types of taxes. each has its own purpose, but the financial taxation

An Introduction to Taxation - . chapter 1. what is a tax?. a forced payment made to a governmental unit that is unrelated

Introduction to Taxation - . john v. balanquit. objectives. after the presentation, students should be able to: identify

Taxation - . chapter 4c. effects of taxation on economic welfare. how are consumers affected by taxes? how are producers