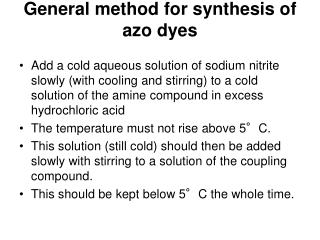 General method for synthesis of azo dyes. Add a cold aqueous solution of sodium nitrite slowly (with cooling and stirring) to a cold solution of the amine compound in excess hydrochloric acid The temperature must not rise above 5°C. GENERAL PROPERTIES OF VAT DYES - . insoluble in water can not be used directly for dyeing can be converted to water

Azo Compounds - . what are azo compounds?. contain the -n=n- group. where r and r’ are arene groups more stable than

Azo Compounds - . what are azo compounds?. contain the -n=n- group. where r and r’ are arene groups more stable than

General “Scientific Method” - . what makes good science?. what is science? or. true. false. science is concerned with

Factoring – General Method - . you have learned a variety of methods for factoring. this section puts all of the

Dyes - Chapter 3: activity 7. dyes. what are they?. dyes. dyes are organic compounds that can be used to impart bright,

Dyes - Are colored organic compounds that can dye fibers or other substrates to a certain color. they can be divided

9.30am Choosing a Method of Qualitative Synthesis - . mr andrew booth, reader in evidence based information practice,