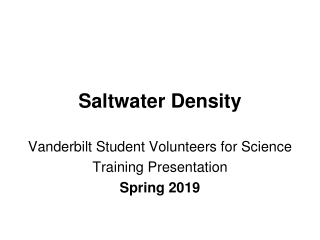 Saltwater Density. Vanderbilt Student Volunteers for Science Training Presentation Spring 2019. Important!. Please use this resource to reinforce your understanding of the lesson! Make sure you have read and understand the entire lesson prior to picking up the kit! Saltwater - . by tyler cj claire lucy will. saltwater maps. 70 percent of the world is water. 97 percent of it is