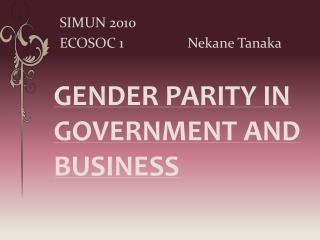 Gender Parity Report 2018 - Women are being paid 82% of the standard compensation. pay parity between genders has come a

Governance in Business and Government - . rolling down the state: decentralisation and development. what is

EQUAL GENDER REPRESENTATION and PARTICIPATION IN LOCAL GOVERNMENT - . background. salga is a body endorsed by the

Gender Differences in Business Communication - . vlad loitarenko form 11a balta school #3-collegium. the subject of my

Government and Global Business - . chapter four. in what ways do governments influences businesses?. 4-1 – politics and

Government and Global Business - . chapter four. what ways does government influences businesses? what is the purpose of

Business, Government, and Regulation - Search the web to keep abreast of changes in industrial policy in the u.s., go