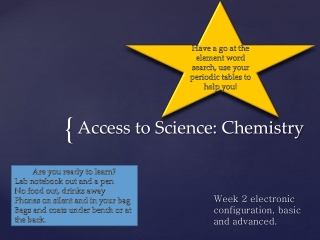 Have a go at the element word search, use your periodic tables to help you!. Access to Science: Chemistry. Week 2 electronic configuration, basic and advanced. Are you ready to learn? Lab notebook out and a pen No food out, drinks away Phones on silent and in your bag