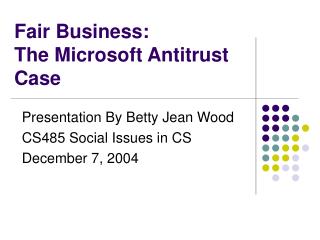 Fair Business: The Microsoft Antitrust Case. Presentation By Betty Jean Wood CS485 Social Issues in CS December 7, 2004. What is a Monopoly?. A monopoly is the control of a product, market, or industry by one individual or company. Monopolies are characterized by the absence of competition.

The Business Case - . one version. the business case. definition of business case: an analysis of the organizational

Antitrust - . in the course of doing business, companies, businesses and individuals can easily run afoul of the

Antitrust - . fundamental assumptions. competition is good big is not bad monopoly practices are bad people should be

Antitrust - . why important to telecommunications? suits regarding abuses of monopoly power led to break up of bell