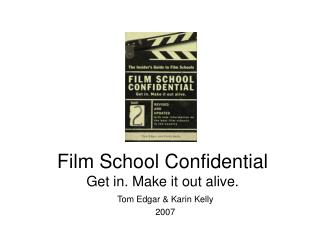 Film School Confidential Get in. Make it out alive. Tom Edgar & Karin Kelly 2007 Introduction to the Second Edition 1st edition was already ten years ago! During the course of ten years…. The emerging of digital video as an accepted medium The growth of Internet & Cellphone culture

Keep it Confidential - . an overview of healthcare information security from a systems approach. presented by: amber

Is It Alive? - . is the puppy alive?. woof! this puppy is alive. it eats its food so it will grow and be a big dog. it

Is It Alive? - . group 5 hannah, kevin, emma. what makes it alive?. everything that is alive shares certain common

Is it Alive? - Living seed baby cow grass worm. non-living car rocks. is it alive?. what is “alive?” – living or

Is It Alive? - . unknown #2 chris, isabelle, max and perla. what questions did we try and answer?. what did we do to

IS IT ALIVE? - . by: jody anderson, camille groh, and hailey napier. does it have cells?. procedure/tools. we took a

Is it Alive? - . by will pierce i400 spring 2007. a difficult question. many possible definitions each seems to

STAY OUT-- STAY ALIVE - . mine hazard awareness campaign. what you don’t know can hurt you!. stay out – stay alive.

STAY OUT-STAY ALIVE - . mines are not playgrounds!. mines are everywhere. there are about 14,000 active mines in the u.s.

IRS Employee Plans Exams: How to Get Out Alive