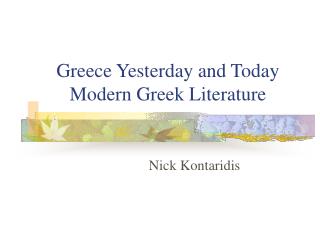 Today and Yesterday - . i ng and ed and irregular past tense. today. today i am smiling. yesterday. yesterday, i smiled.

Masserie yesterday and today - . the masserias of puglia are a popular tourist destination in puglia. the masseria is an

Management Yesterday and Today - . chapter 2. l e a r n i n g o u t l i n e follow this learning outline as you read and

Greece and Greek Theatre - . subtitle. research stations:. ancient greece and greek society: who were they and what did

Greek Literature - . created by: shouq al-shaya hayat al-qattan. table of contents. introduction who? when? why? schools

MADAGASCAR Yesterday Today and tomorrow - “ a dream for a better health and hope for a real developpement ”.