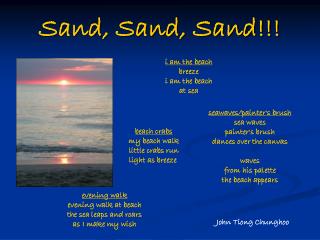 Silica Awareness - . the purpose of this presentation is to inform you to the serious health hazards of silica dust.

CONCRETE - . what is concrete?. concrete i s one of the most commonly used building material s. concrete is a composite

Footprints in the Sand Carolyn Carty, 1963 Original Author: Mary Stevenson, 1936 - Across the sky flashed scenes from his

Formation of Ores - . q. what is the most profitable mineral commodity that is mined today?. a. sand and gravel. it

Soil and Food - . soil: what is it?. inorganic materials (clay, silt, and sand) weathered from solid rock living