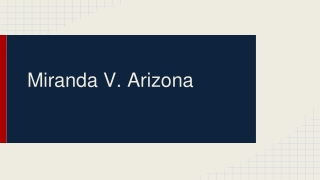 Miranda V. Arizona. Origins of Case. March 1963, Ernesto Miranda, charged with rape, kidnapping, and robbery in Arizona was interrogated/questioned by officers and signed the confession in an isolated room.

Miranda v. Arizona - . christina ascolillo. explanation of the case. who was involved: ernesto miranda and the state of

Miranda v. Arizona - . by: katie losiniecki. facts. ernesto miranda was arrested in 1966 for the kidnapping and rape of

Miranda v. Arizona - . facts of the case. police arrest ernesto miranda after the victim identifies him in lineup police

Miranda vs. Arizona - . by: josh c, airiana m, kent g, tony a. details. the court was called upon to consider the

Miranda Rhew - . snickers. why i took this class:. because i love powell(: . what i did this summer:. went to carowinds 4

Miranda Rights - A cop points at you and says, &quot;read him his rights.&quot; from tv, you know this is not