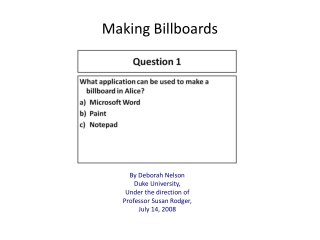 Making Billboards. By Deborah Nelson Duke University, Under the direction of Professor Susan Rodger, July 14, 2008. Setting Up a World. Open a new world, with any template and save it in a directory that you can easily find again. My Billboards  - . come play with us ! we don’t bite . fun in the sun zoo is where you should be!. come play at

What are Billboards? - Advertising is an essential aspect of propagating business across the global platform. among the

Billboards - Global Advertisers - You have a product/ service you believe in. you have great offers to attract your

Billboards - Global Advertisers - It is that time of the year. investors are hunting for instruments, schemes and

Wild Posting-Billboards - Our blueprint is to get your advertisement noticed at low cost with high visibility. we are an

Metro City Billboards - . d igital a dvertising m edia. reaching thousands of people in communities all across the nation