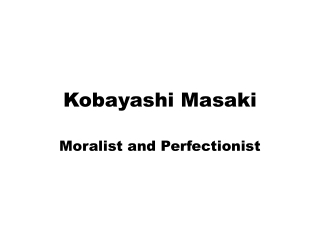 Kobayashi Masaki. Moralist and Perfectionist. Kobayashi Masaki: His Career. Born in Otaru, Hokkaido in 1916: died in Tokyo in 1996 Graduated from the philosophy department of Waseda University Though entering Shochiku in 1941, he was soon conscripted and fought in China. Masaki Endo Presents - . grade ten hiroshima trip. shin-kan-sen. we got on the shin-kan-sen from shin-yokohama. himeji.

A few haiga by Kobayashi Issa - . where issa lived at the end of his life. 1 (not dated) garden butterfly as the baby