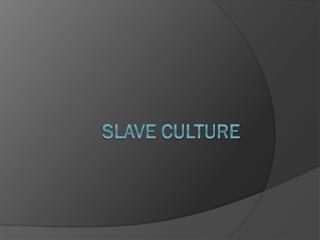 Slave Culture. Outcomes:. 3.5 explain and describe the development and difficulties of slave culture economically, politically, socially, and spiritually in North America and Caribbean The Politics of Slave Culture - . puzzles to consider for next week. why did northerners and southerners come to distrust

Slave Trade - . working in groups of 3, you will simulate decisions slave traders made during the historical time period

Slave Rebellions - Prior to the civil war. slave rebellions. many slave-owners feared slaves would rebel. this caused

Slave Revolts - Ralph waldo emerson. slave revolts. &quot;what is man born for but to be ... a remaker of what man

Slave Spirituals - . history behind the

Slave Trade - . note taking. you are to take jot notes unless otherwise indicated. what is “slavery”

The slave - The grave, in a cave, that won’t behave, that needs a shave, and to bathe, i will engrave, and then pave,

Slave Resistance - Day to day slave resistance . the enslaved african people did not accept their loss of freedom. they