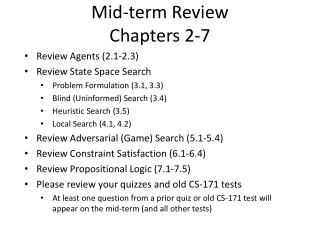 SEMESTER 2 MID TERM REVIEW - . ship a sights ship b on a bearing of 070 degrees. what is the bearing from ship b to ship

Mid-term Review - . for each member of your group, complete the following sentences: it’s great that you are doing

Mid-Term Review - . sample questions. what are some parallels between huck’s narrative and frederick douglass’

Mid Term Review - . study all your old tests know the maps (old and the new ones we just drew) know the art study the new

Mid-term Review - . what have we learned so far. operations strategy process analysis quality and six-sigma cases.

Mid Term Review - . english iii honors. ethan frome. use of light/dark imagery to contrast zeena and mattie who was a

Mid-Term Review - . biology 2013. scientific method and inquiry. 1. what is an experiment? what is an independent