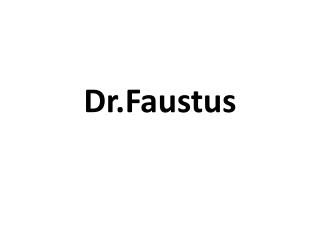 Dr.Faustus - . major themes. epilogue. the chorus emphasizes that faustus is gone, his once-great potential wasted. the

Doctor Faustus by Christopher Marlowe Revision for A2/IB - . q: why does marlowe deny faustus salvation at the end of the

Dr Faustus - . dualities. conflicts. dr faustus is a play which explores and portrays the conflict of everyman. these

Dr. Faustus - Mephistophilis. dr. faustus. who is mephistophillis ?. a demon featured in german folk lore. the role of

Dr. Faustus and Religious Culture - Marlowe was attacked as being neither (quote pg. viii in introduction) ...

Dr. Faustus Themes - . ambition the play is a study in ambition the hero is an “overreacher” who strives against

Introduction to Doctor Faustus - . a drama by christopher marlowe. adapted from (unless indicated): marlowe, christopher.