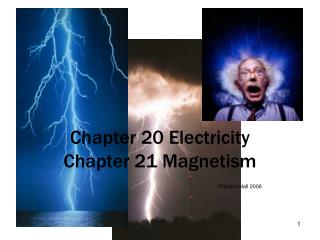 Chapter 21: Magnetism - . what is a magnet? a magnet is anything that carries a static magnetic field around with it.. a

Magnetism Chapter 21 - Essential question- what is magnetism and how does it relate to electricity?. magnetism chapter

Chapter 20 Magnetism - . magnets. the ends of a bar magnet are called poles like poles repel and unlike poles attract

Chapter 20: Electricity - . jennie borders. sps10. students will investigate the properties of electricity and

Electricity and Magnetism Chapter 13 - . lesson 1 how does matter become charged?. what is matter? matter is anything

Chapter 20 Static Electricity - . electrostatics - the study of electrical charges that can be collected and held in one

Chapter 20 Static Electricity - . what are electrostatics? - the study of electric charges that can be collected and held

Chapter 20: Static Electricity - Chapter 20: static electricity. click the mouse or press the spacebar to continue. in

Outline Chapter 6a Electricity and Magnetism - . 6-1. positive and negative charge 6-2. what is charge? 6-3. coulomb’s

Chapter 20 and 21 - . silas marner by george eliot. summary. find 2 – 3 quotes to support each point below. nancy and

BIOLOGY – CHAPTER 20-21 - . i. communities and survival:. a. limiting factors: any abiotic or biotic that restricts the