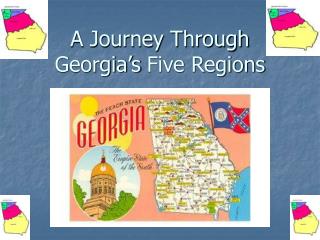 Georgia Studies - . unit 1: geography of georgia/georgia’s beginnings lesson 1: where in the world is georgia? study

Georgia and the American Experience - . chapter 1: where in the world is georgia? study presentation . © 2005 clairmont

US Physical Regions - My travelogue summer 2009. us physical regions. by: tim chapman. introduction. in the summer of

A JOURNEY THROUGH SPAIN’S WINE REGIONS - . the vision…. spanish steps is an educational brand that takes the consumer

Regions and Cities - . westward migration. southeast states. in which state was this taken?. georgia!!. they love peaches

A Hero’s Journey - . what constitutes a journey? what are the stages of a journey?. the pattern of human experience.

THE HERO’S JOURNEY - . the pattern of all human experience. adapted from the hero’s journey: a guide to literature

UNIT 1 TEST REVIEW - . geography. where is georgia ?. ga is located in which hemisphere(s) ?. north &amp; west. where

Georgia Review - . which of georgia’s geographical regions means the “foot of the mountains”?. piedmont. which of

Move your mouse over the different regions of Georgia to learn more about each of them - . on your paper, write down the

Geography of Georgia - . review. which statement describes georgia’s relative location? a. georgia is a northeastern

Georgia Regions and Habitats - . created by kristi dawdy sharon elementary 3 rd grade. before we get started, where in