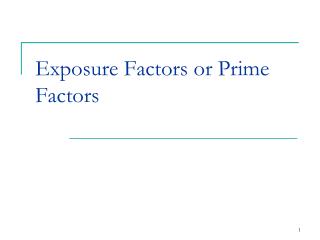 Exposure Factors or Prime Factors. PRIME FACTORS. What is “technique” ? How does it affect the “image”. Exposure Factors – 3 or 4. The four prime exposure factors are: Voltage = kVp* Current = mA* Exposure time = seconds or fractions of a sec* Source-to-image distance = SID. Prime or Composite? Factors or Multiples? - . objective: i can differentiate between prime and composite numbers. i can

Exposure Factors Modification - . by professor stelmark. after the lecture student will:. explain relationship between

Factors, Multiples, Prime Factors HCF’s and LCM’s - . what do the following words mean?. a number in another numbers

Exposure Factors Chapter 4 - . exposure factors. are adjustable variables that can influence the diagnostic qualities of

1-2: Prime Factors - . factors: when 2 or more numbers are multiplied, each number is called a factor of the product ex)

Factors, Prime Numbers &amp; Prime Factorization - . the factors of a whole number are: all the whole numbers that

Prime Time Factors and Products - . 1.1 playing the factor game. vocabulary. factor : one of 2 or more whole numbers that