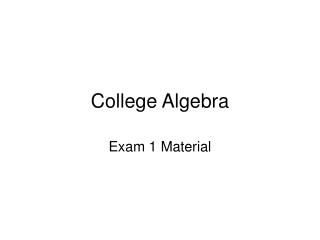 Algebraic Expressions - . lesson 5-1. evaluate an algebraic expression. the branch of mathematics that involve

Algebra - Exam revision. select a strand below and then a topic. algebra. number. data. shape. by ben cooper. algebra.

ALGEBRA TILES - . algebra tiles. rachel magnuson. by the end of this show, you’ll be able to. . . . define and explain

College Algebra Week 3 Chapter 3 - . the university of phoenix inst. john ensworth. where to from here?. we have played

SQL (slides by Dr. Li Bai) - . sql is based on relational algebra. an algebra is a system of operations where each

Let’s Do Algebra Tiles - . roland o’daniel, the collaborative for teaching and learning october, 2009 adapted from