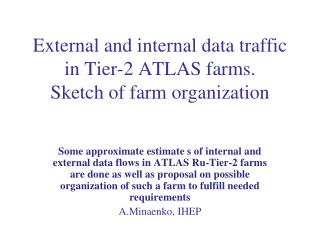 External and internal data traffic in Tier-2 ATLAS farms. Sketch of farm organization. Some approximate estimate s of internal and external data flows in ATLAS Ru-Tier-2 farms are done as well as proposal on possible organization of such a farm to fulfill needed requirements A.Minaenko, IHEP. Internal and External Parasites - . metamorphosis. the process by which organisms change in form and structure in their

Respiration – external and internal - . external respiration. how does oxygen move into the blood?. o 2 is in high

ATLAS Tier-3 in Geneva - . szymon gadomski, uni ge at cscs, november 2009. the geneva atlas tier-3 cluster what is it

ATLAS TIER 3 in Georgia - . the 5 th international conference &quot;distributed computing and grid-technologies in

External and internal forces - . there are two types of forces that designers must consider when designing structures.

Internal and External Conflict - . what is conflict?. a conflict is a struggle between opposing forces. there are two

Internal and External Conflict - . what is conflict?. a conflict is a struggle between opposing forces. there are two