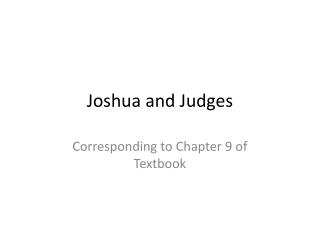 Joshua and Judges - . the bible course. document#: tx001078. joshua. joshua was the successor to moses who led the

Joshua and Judges - . the bible course, unit 5. document#: tx001078. joshua. joshua was the successor to moses who led

Joshua, Judges, Ruth - . overviews. joshua 6th book of the bible. meaning: the conquest of the land promised is a

Joshua and Judges The Israelites in the Holy Land - . the bible course. document#: tx001078. through the wilderness. led

Conquest and Judges - . joshua 11 (defeat of the northern canaanite

Judges and Samuel - . the judges were raised up by god to save the people of god (judges 2:16). they were

Judges - . 03 - 04. a cd of this message will be available (free of charge) immediately following the service. it will

Judges - . deborah and gideon. after joshua dies. what’s so special about judah?. “ the sceptre will not depart from

JUDGES - Word scramble unscramble the following letters to reveal the first words uttered by our lord to gideon. name: