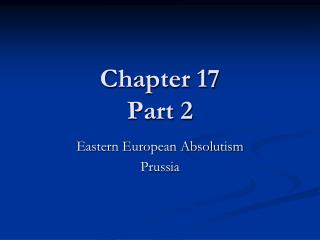 Chapter 17 Part 2. Eastern European Absolutism Prussia . Prussia (the Hohenzollerns). Brandenburg : Ruler of Brandenburg was designated as one of the 7 electors for the Holy Roman Emperor in 1417 Was once called, “The Sandbox of Europe” Chapter 17-Part 2 - . protein in foods. where do they come from?. eggs meat fish poultry. variety of sources. other

PRECIPITATION REACTIONS Chapter 17 Part 2 - . insoluble chlorides. all salts formed in this experiment are said to be

Chapter 17 Part 2 Bonds Payable - Issuing bonds at a premium. premium on bonds payable is an account used when bonds are

Chapter 17 Templates and Exceptions Part 2 - . dale/weems/headington. an exception is…. an unusual, often unpredictable

Module 17 Part 2 - . beyond piaget. social development. how a person develops a sense of self or self-identity,

Chapter 17 – Part 4 - . watch an overview of the intestines and abdominal cavity. this video is graphic as it uses a

Chapter 17 – Part I - . alimentary canal mouth pharynx esophagus. carbohydrates, proteins and fats are all made up of

Chapter 17, part B - . specific defenses of the host: the immune response. the results of ag-ab binding. figure 17.9.