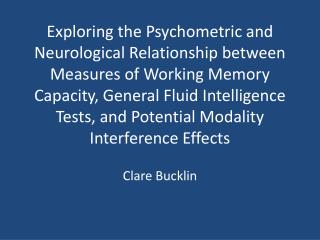 CJ Bucklin, B.A. - Discerning the physiological and behavioral substrates of the relationship between fluid reasoning and

Cassandra Clare - . natasha beck. city of bones -first of trilogy jace wayland recounts a childhood event how does this

County Clare - . colm o’ meara and aoife hogan. county clare. the irish name for our county is an clár. the english

Clare Goodess - Estimation of future changes in extreme climate events for the user and decision-making communities.

Dr Clare Woolhouse - ‘i think you need to be empathetic and have good interpersonal skills’: the particularities of