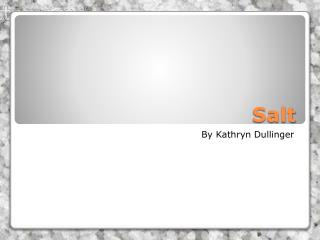 Salt. By Kathryn Dullinger. Basic info. Salt dates back farther than the bible (2,250 BC) salt has originated from literally everywhere Salt is vital for survival and thus it is so engrained in so many societies. What is Salt?. Compound of Na+ and Cl- Salt Flux - . definitions overbar ū represents a sectional average at a given time prime u’ denotes deviations from

Salt dough - . ingredients. 2 cups flour 1 cup salt 1 cup water you can make this using any cup, mug or pot. just use the