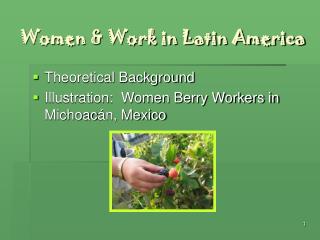 A Comparison of Monetary Anchor Options for Commodity-Exporters in Latin America and the Caribbean Jeffrey A. Frankel H

Women at Work - . “every woman is a working woman” “a woman’s work is never done.” “she works hard for her

Latin America - . a diverse region-steeped in the heritage of three cultures, one language, and one religion.

Nation Building and Economic Transformation in the Americas, 1800-1890 - . chapter 23. independence in latin america.