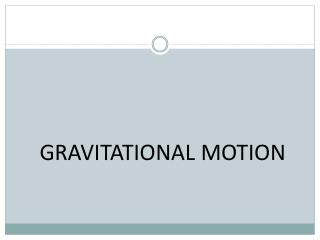 Gravitational Energy - . gravitational work. the work done by the force of gravity only depends on the vertical distance.

Gravitational Review - . 1. gravity is continuously applied to an object, causing it to accelerate. after a period of

Gravitational Waves - . astr 3010 lecture 24. propagation speed of information. em waves : this should be propagated at c

Chapter 10 - Gravity and Motion - . newton’s first law of motion. a body continues in a state of rest or uniform motion