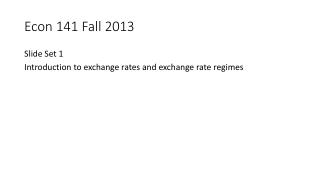 Econ 141 Fall 2013. Slide Set 1 Introduction to exchange rates and exchange rate regimes. Defining the Exchange Rate. The exchange rate is the price of a unit of one currency in terms of another currency. For example, the U.S. dollar exchange rate for euros is E $/€ =dollars/one euro

Econ 4a - . 7 th grade honors s.s. nikki miller seaford middle school. economics 4a review . to do have a seat agenda:

2013 FALL WORKSHOP - Mission strengthening all students for life through participation in excellent, fair, safe, and

Literature &amp; Film Fall 2013 Ms. Wise Theme Song - Welcome! please have a seat where you like for today and

LET THY MANTLE FALL ON ME - . elijah was god’s prophet: elisha stood close by and ere the prophet left him, he heard

Fall Protection - . why fall protection?. do your hands get sweaty when you watch someone working from heights? do you