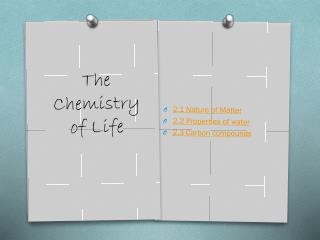 2.1 Nature of Matter 2.2 Properties of water 2.3 Carbon compounds. The Chemistry of Life. 2.1 The Nature of Matter. Atoms = basic unit of matter. Protons and neutrons Protons have positive charge Neutrons have NO charge Both found in the nucleus of an atom Electrons 2.2 Properties of Water - . review. an atom is the basic unit of matter electrons are negatively charged and move around

Biology 2.3 Carbon Compounds - And so, carbon can bond to other carbons and elements such as h, n, o, and p to form large

Properties of Water Chapter 2.2 - . most of the material in chapter 2.2 is not necessary for this course. there are a