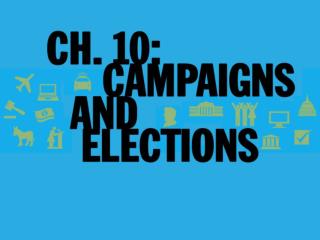 Campaigns and Elections. http://www.democracy-international.org/us-election-day-2013-yes-gambling-and-no-tax-increase. In Oregon, Ballot Measure 58 would prohibit schools from teaching foreign students in their native language after one year in elementary school or two years in high school. Campaigns and Elections - . history and strategy. i. history. the non-candidate (1792-1824): early candidates considered

Benchmark 3 Review - . 61. how are the georgia supreme court justices selected? a. they are appointed by the chief

Benchmark 3 Review - . 61. how are the georgia supreme court justices selected? a. they are appointed by the chief

Nominations, Campaigns and Elections . . . The path to the PRESIDENCY Presidential election 2008 and 2012

Persuasive Campaigns - . the triumph of process. . 1. what makes a campaign?. process over event systematically create

10- 1 - . elections and campaigns. what are the constitutional requirements for elections? election rules were left up to

Why are elections important to democracy? - . a framework for evaluating elections and campaigns. freewrite. why are

THIS - . is. jeopardy. your. with. host. ms herring. jeopardy. elections and campaigns. political parties. more on

Campaigns and Elections - . first time ever…. election of 1800: the transition from adams to jefferson marked the first