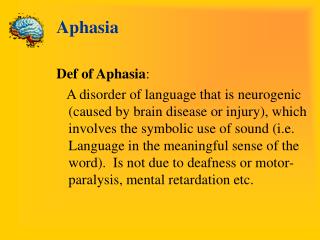 Aphasia. Def of Aphasia : A disorder of language that is neurogenic (caused by brain disease or injury), which involves the symbolic use of sound (i.e. Language in the meaningful sense of the word). Is not due to deafness or motor-paralysis, mental retardation etc. . Aphasia - “i mpairment of central language abilities in the speech modality following brain damage .“ in contrast to:

Aphasia - . asrar altuwairqi. out line. what is aphasia? aphasia type what causes aphasia sing and symptoms fact about

Aphasia - . asrar altuwairqi. out line . what is aphasia? aphasia type what causes aphasia sing and symptoms fact about

Aphasia - . • aphasia is a language impairment due to neurological disease or damage. • broca’s aphasia presents as

Aphasia - . what is aphasia? types of aphasia cognitive neuropsychology and aphasia syndrome or symptoms? computational

What is Aphasia? - . the disorder, it’s effects, and treatment. you will learn…. definition types of aphasia symptoms

What is Aphasia? - . - aphasia is a disorder that results from damage to the parts of the brain that contain language.

Aphasia Test 4 - . you will totally kick ass on this test!!. behaviors of left neglect. excessive use of r margin