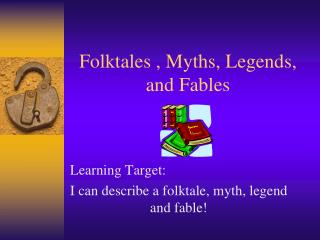 Folktales , Myths, Legends, and Fables. Learning Target: I can describe a folktale, myth, legend and fable!. Oral Tradition. Stories handed down through generations using word of mouth. The stories we have all heard as a kid! Example: Goldilocks and the Three Bears Jack and the Bean Stalk Once Upon a Time……. - Once upon a time……. writing folktales. a power point presentation. by: farah kamal. what

Elements of Literature - You will be learning about the following folktales:. fablesmythslegendsfairy talestall tales.

Folk Tales: Myths, Tall Tales, Fables, and Legends - . 8 th grade literature omms. what are some tall tales that you

The Oral Tradition in Literature - . myths, folktales, fables, and legends. the oral tradition in

MYTHS AND FOLKTALES - . journal. what are some of the difficult aspects of going to a private, christian school? . why

Myths, Folktales, &amp; Fables - . what is a myth?. a traditional story that explains some aspect of human life or

Norse myths and legends - . by tom.r. introduction to norse myths. when the vikings came to pillage britain, they had

Why do people tell s tories? - . myths legends folktales fables fairy tales. what is a myth?. myth is the general term

Folklore: Myths, Folktales, Legends, and Fables - . folklore can be defined …. as all the traditions, customs, and

Myths, Legends and Folktales - . this term we will be thinking about. what is the purpose of stories in our society? what

Myths and legends - . catalina pardo sebastian millan 6c. what happens before life. all humans before they were born