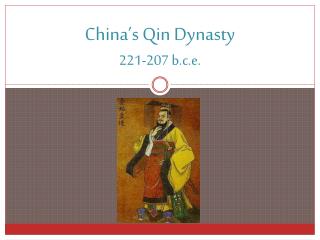 China’s Qin Dynasty 221-207 b.c.e. The Rise of the Qin State. 24oo years ago, the Qin (pronounced “chin”) state—one of the many “ Warring States ”— became wealthy by giving land to peasants and allowing private farming. This increased productivity and lessened the power of the landlords. 20c China: From Republic to Communist Power - . the end of the chinese dynasty. the scramble for concessions. the boxer

The Dynastic Cycle - . 2/15/11 world history. what is the dynastic cycle?. in china, dynasties rise and fall in a pattern

Tudor dynasty - . a renaissance family. the history. the  tudor dynasty  or  house of tudor  was a  royal house

Manchus and Imperialism Qing Dynasty 1644-1900 - . the next dynasty was established from outside china from what we call

The Qin Dynasty - . aim: to what extent was the period of the qin dynasty successful in uniting china?. do now: using

Test Two Empires of the East - . world history sswh11 students will investigate political and social changes in japan and