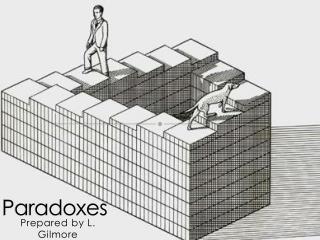 Paradoxes. Prepared by L. Gilmore. What is it?. A paradox is an argument where the premises, if true, infers a conclusion that is a contradiction. Paradoxes are self contradictory because they often contains statements that are both true, but cannot be true at the same time. Semantic Paradoxes - . the barber. the barber paradox. once upon a time there was a village, and in this village lived a

Zeno’s Paradoxes - . what is a paradox?. anything that is/leads to a logical contradiction a “square circle” the

Semantic Paradoxes - . the barber. the barber paradox. once upon a time there was a village, and in this village lived a

Zeno’s Paradoxes - . can i move?. zeno. the arrow paradox. y ou cannot even move. if everything when it occupies an

Paradoxes of Apportionment - . the alabama paradox, population paradox, and the new state’s paradox. what is a

Semantic Paradoxes Continued - . recap. the barber paradox. once upon a time there was a village, and in this village

Time Travel Paradoxes - . &amp; some fun with time machines. why do we want to travel in time?. time travel

Contradictions and Paradoxes - . insights into literature and life. what is a contradiction?. when two things are said to

Graphic Design Paradoxes - . many aspects of graphic design are paradoxical. u sing the word paradox here to mean an

Paradoxes of Baptism - I. baptism is a birth but a death. john 3:1-6 - new birth nicodemus ?born again" ?born of

Sharing Our Paradoxes - . recognizing and affirming the paradoxes within islam &amp; christianity. the integrity of