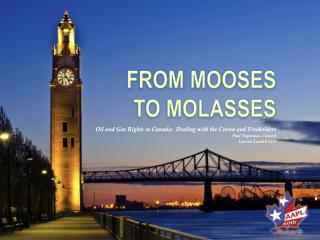 FROM MOOSEs TO MOLASSES FROM MOOSEs TO MOLASSES. Oil and Gas Rights in Canada: Dealing with the Crown and Freeholders Paul Negenman, Lawyer Lawson Lundell LLP. OIL & GAS RIGHTS IN CANADA. Canada is a bit of an odd place About 35 million people (less than California)

FROM MOOSEs TO MOLASSES

Living or Non…that is the Question!! - . a slide show of 15 objects that need to be classified as living, non-living,

Social Studies Review - . unit 8 lesson 1. the king and parliament taxed the colonists to …. pay for the french and

BRITISH POLICIES - . proclamation of 1763 – colonist could not settle west of the appalachian mountains (quebec act =

The Ron Clark Academy Staff Development Initiative - . staff development unlike any other!. who is ron clark?.

Why Rheology? - . it is about material behavior the mathematics are simple but powerful it can be graphed for those

THE SUGAR ACT by: Ethan, Jordan, Tavian , Jarron - . on april 5, 1764 grenville passed a modified version of the sugar

Ethanol Production - . ethanol?. ethanol is a renewable fuel produced as an alternative to fossil fuel such as diesel and

Physics of Brownian Motors: Swimming in Molasses and Walking in a Hurricane - Principles of directed motion of molecular

The Story of Washington’s Murder (according to Bill Sutherland) - . 12 th dec 1799 inspects plantation in snow 13 th