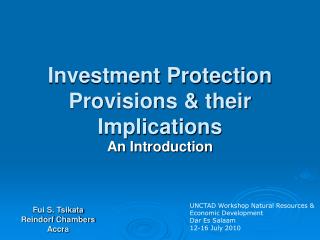 Side Impact Protection in the United States - Page 3 of 10. fmvss no. 214 upgrade. goals:improve head impact protection

CONSUMER PROTECTION ACT - . consumer protection act. enacted by the parliament in 1986 to provide for better protection

Global Investment Promotion Benchmarking 2009: Implications for the Caribbean Celia Ortega - October 2010. what is

Regional Transmission Network Development: Implications for Trade and Investment - . results of the analysis of the

Investment Policy of the Republic of Uzbekistan - . the investment legislation of uzbekistan is one of advanced amongst

Financial Crises Why They Occur, What to Do about Them, and Implications for the Investment Market - . e. maskin