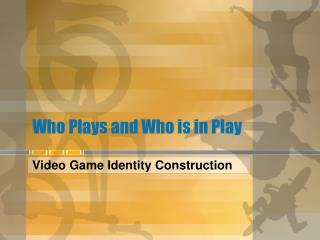 Who Plays and Who is in Play. Video Game Identity Construction. http://www.ctrlaltdel-online.com/comic.php?d=20021105. Research Questions. In what ways do video games contribute to identity formation? Who is Who? - . guessing game. guess what each person is famous for…. -look at each picture, think about what they do.

Who is who? - . go. she is young. she’s got long wavy brown hair, big blue eyes, a small nose and a small mouth.

Who is who? - British royal family. who is who?. wojtek bensch, kasia bałazy. her majesty the queen. elizabeth

Who Is Who In Washington - . president of the united states. barack obama. speaker of the house. john boehner. vice

Who is Who? - . road research actors in europe. organisations considered. ‘umbrella organisations’ no private

Who Is Who In American History - . id these famous american

Who is Who in the Internet ? - . internet engineering task force (ietf): the ietf is the protocol engineering and

Who is helping Who? - . animals and human relationships . how do we benefit from animals?. food clothing service research

Who is Driving Who? - . who is driving who. web 2.0 . coke campaign: directed, do this campaigning. iceland whales

Who is Who and What is What in EU Pharmacovigilance - . vicki edwards qppv and head of affiliate vigilance excellence

Who is….? - . by: brendan mccarty. alternative rock band. brendan’s favorite band. a band everyone should hear. (a

Celebrities Who Play Poker - Let’s take a look at which famous actors, athletes, businessmen etc. can be spotted at the