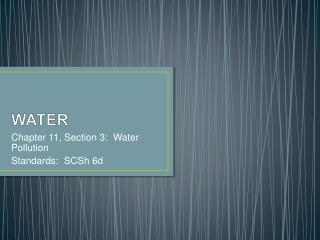 WATER. Chapter 11, Section 3: Water Pollution Standards: SCSh 6d. What is water pollution?. Introduction of chemical, physical, or biological agents into water that degrade water quality and adversely affect the organisms that depend on the water.

Taharah wa Wudu Water - . the shariah has divided water into 4 kinds:. mutlaq water. considered pure because of its

Water Cycle - . importance of the water cycle. “the vitality of all life on earth and our economic prosperity depend on