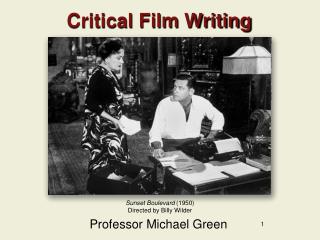 Critical Writing - . using the elements and the standards. start at the beginning. analyze the q at i what is the

Critical Writing - . discuss two manipulator parasites from the talk. specifically, how did the parasite manipulate its

Critical Approaches to Film - . screen theory. more than 22,000 people have signed a petition for disney to make its next

Critical Approaches to Film - . screen theory . more than 22,000 people have signed a petition for disney to make its

Writing Film Reviews - . 2.4 task. what is the purpose of a film review?. to inform people about the film. to give an

Critical Approaches to Film - . representations of race this lesson is based around the article by stam &amp; spence

Writing Critical Reviews - . guidelines for reviews. you have to be familiar with the work and have an opinion (which can