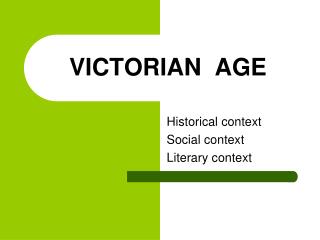 An Overview of Prochaska and DiClemente’s Stages of Change Model - . developed by catherine segan for the victorian

The Victorian Era 1832-1901 - . learning objectives. to identify the major authors and literary contributors of the

Do Now - . what do you know about the victorian period in england? what images are called to mind when you hear the word

TASMANIAN Department of Education - The key ideas and strategies that underpin multiplicative thinking. presented by

TASMANIAN Department of Education - The key ideas and strategies that underpin multiplicative thinking. presented by

The Woman in Black: Revision Notes! - . themes : natural and the supernatural, isolation, revenge and justice, fear.

Is belief in God a delusion? A response to Richard Dawkins - . “ it has been a good year for atheists…” the times,

Victorian Pharmacy - . the role of the nineteenth century chemist in public health: from laudanum to custard, .

Aniseikonia: A rare cause of diplopia (Including after “successful” cataract surgery) - . logan mitchell 1 , lionel

The Policy Cycle, External Influence and the Role of the Chief Nursing Officer - . dr. judith shamian president and ceo