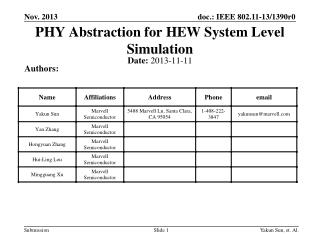 PHY Abstraction - . authors:. date: 2014-03-17. a lot of submissions have been presented in ieee on phy abstraction for

Some Simulation Scenarios for HEW - . hew simulations need to include p2p, unassociated &amp; sticky clients to