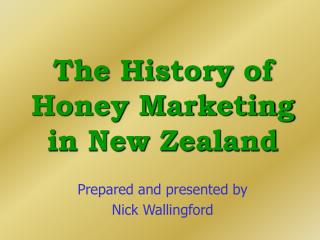 The History of Honey Marketing in New Zealand The History of Honey Marketing in New Zealand. Prepared and presented by Nick Wallingford. What can we learn from history?. Maybe not a lot, but who knows? … Recognise some of the trends, the repeating charteristics Appreciate the features that seem to ‘act’ upon the industry

The History of Honey Marketing in New Zealand

Unit 3 Marketing - . learning objectives. to define marketing and explain the elements of marketing to understand the

The Effects of Neonicotinoids on Honey and Bumble Bees Vera Krischik, Entomology, UMinnesota - . sare 2009 and lccmr

By Allen Curnow - . you know the school; you call it old – scrub-worn floors and paint all peeled on barge-board,