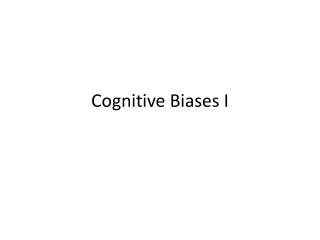 Cognitive Biases I. Optional Reading. Today’s lecture is based primarily on: “How We Know What Isn’t So,” Chapter 1. By Thomas Gilovich , a psychologist. Patterns. Pattern Recognition. Seeing patterns in your data is a good thing, and humans are natural pattern finders. Cognitive Biases - . yan bulgak mar 550 december 04. what are they. a cognitive bias is the result of observation by a

Cognitive Biases - . how did you do on the bouncing ball count test in the video ? do you think the directions influenced

Cognitive Biases 3 - . seeing what we expect to see. bias. our expectations often influence how we evaluate claims and

Cognitive Biases 3 - . hw2 problem #1. here are two sequences of coin-flips. x is one side of the coin, o is the other.