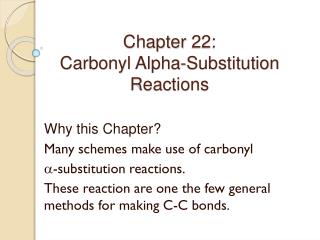 Chapter 22: Carbonyl Alpha-Substitution Reactions. Why this Chapter? Many schemes make use of carbonyl a -substitution reactions. These reaction are one the few general methods for making C-C bonds. The  Position. Nucleophilic reactions of carbonyl groups - . oxygen is more electronegative than carbon (3.5 vs 2.5) and, therefore, a

Reactions of Carbonyl Compounds - Outline1. addition to the carbonyl group of aldehydes and ketones2. reduction of

Nitrogen Based Carbonyl Reactions - . some reactions of aldehydes and ketones progress beyond the nucleophilic addition

AROMATIC SUBSTITUTION REACTIONS - . nomenclature. learn nomeclature either on your own or use the organic nomeclature

Chapter 4. AROMATIC ELECTROPHILIC SUBSTITUTION REACTIONS - 4.1. introduction. definition: aes = replacement of one of the

Carbonyl Condensation Reactions - . very general reaction. what is needed? a ketone or aldehyde one reactant must have a