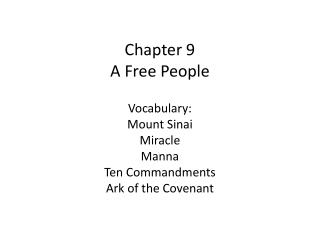 9 Guilt Free Online People Finder Tips - Learn that has a phone number by performing a reverse phone search. our reverse

The Free People - . a study of the ancient and contemporary berbers of north africa amanda brown, anum khan, and chelsea

Chapter 18 A Strong People - . vocabulary parable- short story with a message. ezra and isaiah- prophets who focused on

Chapter 10 A Conquering People - . before he died, moses told the israelites to make god and their faith the most

Chapter 9. Context-Free Grammars for English - . from: chapter 9 of an introduction to natural language processing,

Chapter 9: Are We Free or Determined? - . introduction. determinism – all events are caused fatalism – events are

A Dividing Nation Chapter: 9 - . was the civil war inevitable?. hot roc: choose one question to respond to. if you are