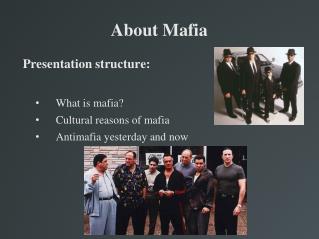 About Mafia. Presentation structure: What is mafia? Cultural reasons of mafia Antimafia yesterday and now. What is Mafia?. Mafia is a criminal organization which developed in Sicily Mafia's aim is to rule in the territory and take the place of the central government. The Story about the Mafia - . immigration of italians – early 1900s earn money from crime irish and italian criminal

MAFIA - . also known as werewolf or assassin is a party game modeling a battle between an informed minority and an

The Mafia - . the economic structure of history’s most notorious gang. introduction. the mafia is viewed by many people

THE MAFIA - . edoardo crisafulli. the four criminal networks in italy: the mafia (sicily); the camorra (campania-naples);