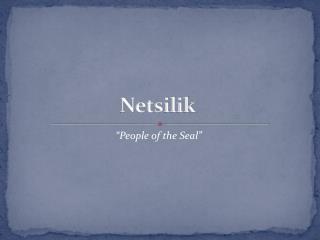 Netsilik. “People of the Seal”. Appearance. S imilar appearance to many Inuit tribes which differed from other first nations Many facial features similar to East Asian Eskimos - . in this presentation you will learn everything to do about eskimos. all about

Inuit - . by carson and maddy. food. the inuit people eat fish, sea mammals, and seals. the inuit hunt seal when the

Inuit - . arctic. the inuit were mainly hunters, and relied heavily on the animals of the arctic as their main source of

INUIT - . by: joe r &amp; darcy w. clothing. the inuit made most of there clothing from caribou skin or sealskin in

INUIT - . by mrs. berry. where the inuit live in the world. inuit, a people inhabiting small enclaves in the coastal

Inuit - . myan and jonah 2b. location. they lived in mainland alaska in the northeast. homes. they mostly lived in wooden

Inuit’s - . by: eva nichols. who are they?. inuit simply means “people” , originally known by europeans as

PCB-Contaminated Country Food in the Canadian Arctic Affecting Inuit Health - . looking at the effect pcbs have had on

The Inuit - . inuit arrival in north

The Inuit - . location. the inuit occupy much of northern canada, and are comprised of many different groups: labrador