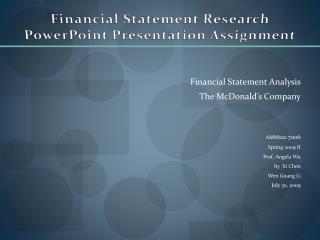 Chapter 6 - . financial statement analysis. 上海金融学院会计学院. after studying chapter 6, you should be able

Disclosure Statement - . “i have no financial disclosures to report but i am employed by the south carolina hospital

Welcome to FUTUREMED’S PowerPoint demonstration of the Discovery-2 spirometer. - Welcome to futuremed’s powerpoint