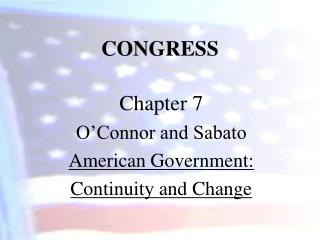 Library of Congress Classification - . classification. the intellectual process by which things or concepts are organized

GOVT 2302 - . the united states congress – constitutional design . this week we read through and attempt to understand

The Failure of the Congress of Vienna - . definition and focus question. failure refers to the state or condition of not

Congress - . chapter 12. the constitution and the legislative branch of the government. article i describes structure of

Congress and representation: elections - . the logic of american politics chapter six: congress. members of congress as