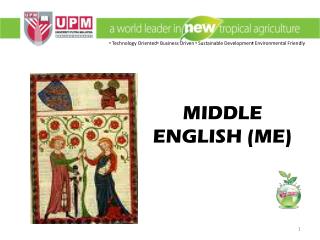 MIDDLE ENGLISH (ME) - . middle english (me), is a kind of middle stage within the evolution of english lasting from

Middle English - . en 307 history of the english language courtney enright. do you recognize these words?. ayeyn

Some Old English and Middle English letters - . þ, ð. used in handwriting until late in the 15th century: oe þæt,

Middle English - . the word “knight” did not refer to anything like the picture here until after the norman invasion