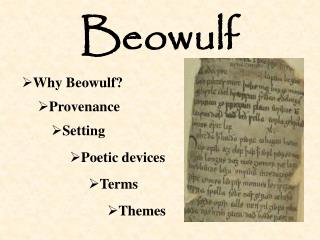 Beowulf. Why Beowulf?. Provenance. Setting. Poetic devices. Terms. Themes. Why Study Beowulf?. 1. Beowulf is the oldest poem in the English language, so everything written since Beowulf stems from it in some way. Provenance - . have a look at the activity sheet. there are four quotes. have a look! answer only the first two